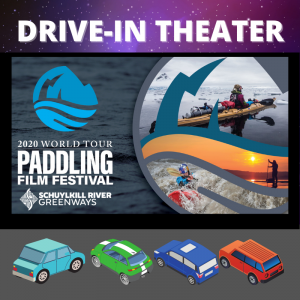 The International Paddling Film Festival is now a unique and socially distant Drive-In Theater experience you can attend from the comfort of your car. The drive-in will take place at Sunnybrook Ballroom in Pottstown on Oct. 22, 2020. Enjoy a variety of award-winning paddling films on a large outdoor screen with audio through your car radio. Gourmet snack boxes available for purchase!

Two Events in One

We’re combining the Paddling Film Festival with our Serving the Schuylkill Appreciation Night, an annual fundraiser for Schuylkill River Greenways (SRG). As part of the night’s festivities, we will be honoring several deserving individuals and organizations for their support of SRG in our mission to connect people and communities to the Schuylkill River and Schuylkill River Trail. The awards will take place as a pre-recorded video before the paddling films viewing.

More Details about the Event

The Paddling Film Festival is an international adventure film tour presenting the world’s best paddling films of the year. Get your ticket today to enjoy a collection of paddle adventure films including the NEW "Schuylkill Soaring" film featuring the Schuylkill River! The event will also include an online auction and raffle prizes.

Every film festival attendee receives a FREE one-year digital subscription to Paddling Magazine and a chance to win an Aqua-Bound canoeing, kayaking, kayak fishing, or SUP prize pack (up to a $425 value). You also get to cast your vote during the event for the best film to go toward selecting the People’s Choice Award winner.