Greater Philadelphia is the proud home of the Circuit Trails, a vast regional network of hundreds of miles of multi-use trails that is growing in size each year. The Circuit connects our local communities, providing endless opportunities for recreating and commuting. So whether you bike it, walk it, or run it, the point is — just enjoy it.

When we connect the 750 miles of The Circuit, Greater Philadelphia will have a trail network unlike any other in the country — connecting the urban, suburban and rural communities of the fifth largest metropolitan region in the US. The Circuit will make our region stronger by providing a place for healthy transportation and recreation, connecting our communities to green space, and making our neighborhoods more attractive places to live and work.

The Schuylkill River Trail is part of The Circuit. You can download a map of The Circuit below. See official website to learn about the other trails in this network.

The Washington-Rochambeau Revolutionary Route traces the historic path that French troops, under the command of General Jean-Baptiste de Rochambeau, took in 1781 from Newport, Rhode Island, to White Plains, New York-where the French forces joined with those under General George Washington's command-and then together marched to besiege and capture the British army at Yorktown, Virginia, thereby discouraging any further major military efforts by the British in the U.S. for the rest of the American Revolutionary War (the peace treaty was signed in 1783.

The route passes through Philadelphia, where, the Continental Congress reviewed the allied troops, and the grandeur of the French army helped restore the spirit of America. In Chester, Washington literally danced on the dock when he learned that the French fleet had arrived in the Chesapeake Bay, where it could prevent reinforcements from reaching the British army at Yorktown. From here they continued into Delaware -- about half of the Continental troops went by row-barge. 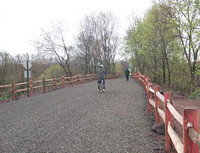 The 19-mile Perkiomen Trail runs through the Perkiomen Creek Valley from its junction with the Schuylkill River Trail at Oaks, Upper Providence Township to the largest County Park, Green Lane Park. Most of the trail is a 10-foot wide cinder or stone aggregate (non-paved) surface with grass shoulders. Selected sections are paved where deemed appropriate. 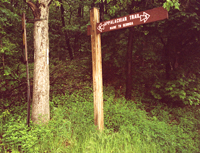 Port Clinton is a small town with a big story. The town of 300 sits in the gap where the Schuylkill River cuts through the in the Appalachian Mountains, and was a transportation hub throughout the 18th, 19th, and 20th centuries. The Schuylkill River, Schuylkill Navigation System, Pennsylvania Railroad, and the Reading Railroad all intersected in Port Clinton, making it one of the most important points of commerce for decades.

Access to the Appalachian Trail is located in the western end of the Borough along the railyards of the Blue Mountain, Reading, and Northern Railroad.

USE EXTREME CAUTION when entering and leaving the trail, as it is necessary to pass through an active railyard to gain access.