Hundreds Participate in 3rd Annual Ride for the River 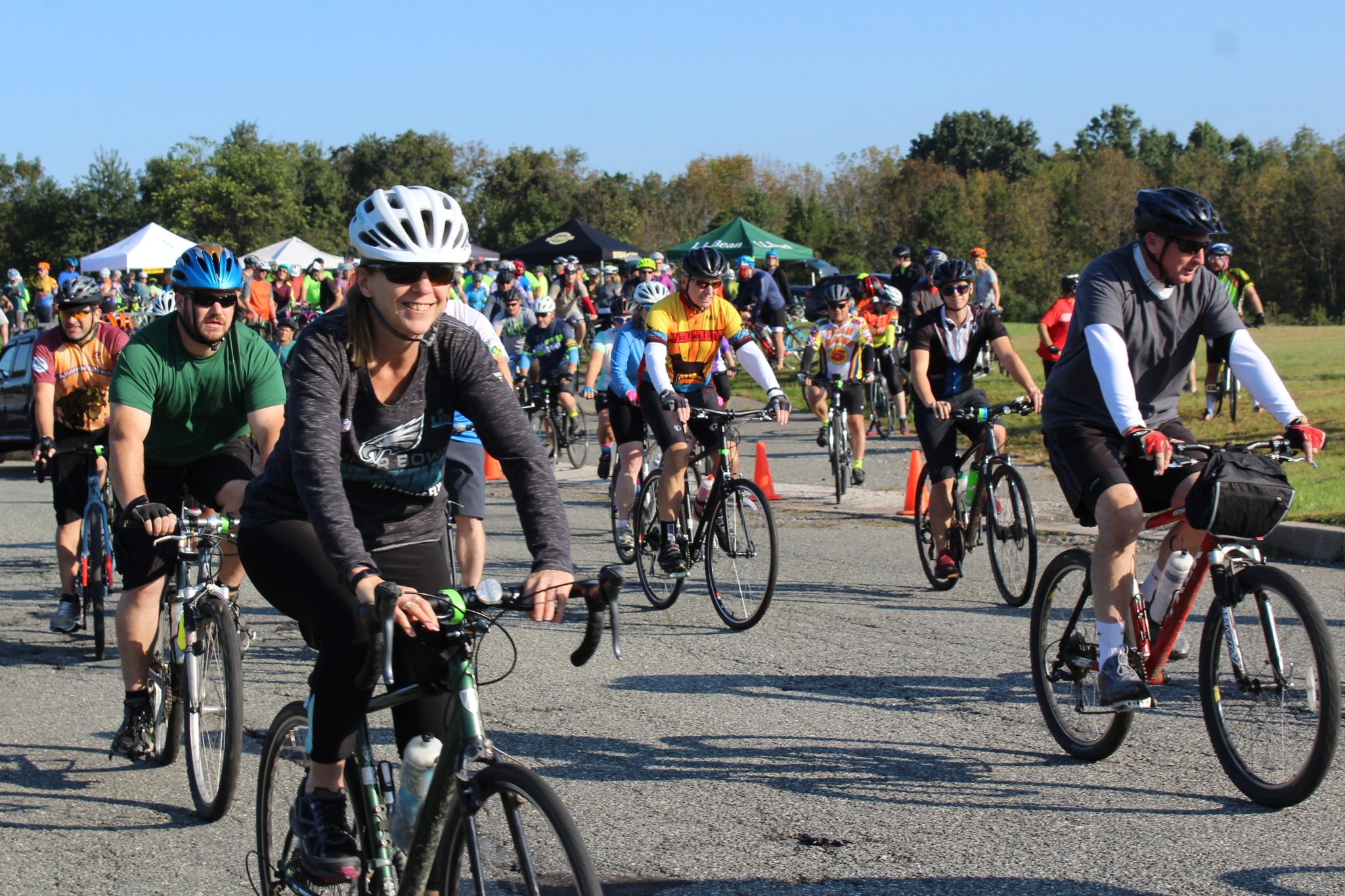 Hundreds of cyclists start from Circle of Progress Drive in Pottstown as they participate in the 3rd Annual Ride for the River on Sept. 29.

The sun-filled fall day on Sept. 29 did not go to waste for the 300 bicyclists that spent it outdoors on the Schuylkill River Trail as part of the 3rd Annual Ride for the River.

Last Saturday was just about perfect with blue skies, sunshine and temperatures in the 70s which many would say was much needed after the recent summer of torrential rains and flooding.

“We couldn’t have asked for better weather for the ride. The beautiful day allowed bicyclists to truly enjoy the trail and see all the efforts that have gone into making it a recreational resource for the region,” said Schuylkill River Greenways National Heritage Area Executive Director Elaine Paul Schaefer. “We are very grateful for the many sponsors and volunteers who made this amazing event a success.” 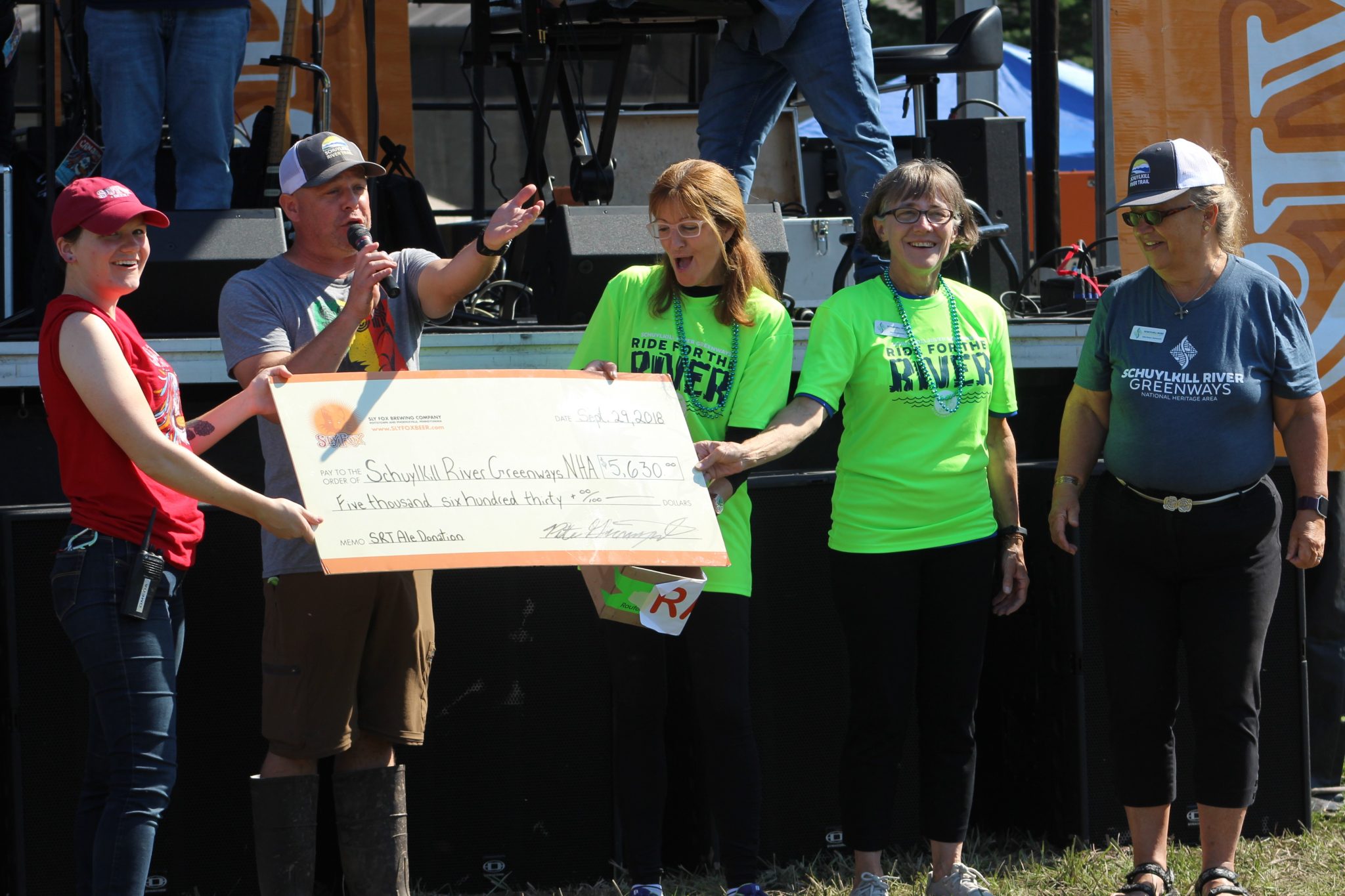 Sly Fox Brewing Company presented Schuylkill River Greenways National Heritage Area with a donation of $5,630 to at the music festival

The Schuylkill River Greenways NHA organizes the annual ride which began and ended at Sly Fox Brewery’s Can Jam Music Festival in Pottstown. The first wave of riders completed a 40-mile route by traveling to Reading then returning to Pottstown. The second wave of riders did a 16-mile route where they stopped in Union Township before heading back to the music festival. Democratic congressional candidate Chrissy Houlahan, state Sen. John Rafferty, R-Montgomery and state Rep. David Maloney, R-Berks, came out Saturday to wish the riders well before they headed out on their journey.

Rafferty spoke about how the Schuylkill River and trail are important resources for the community as well as the efforts that have been made to improve the water quality of the river.

“I became very motivated having been born and raised next to the Schuylkill River all these years … to make sure I do riparian buffer legislation every year to protect our waterways,” Rafferty said.

The Schuylkill River Trail runs alongside the river and bicyclists that participated in Saturday’s ride got to enjoy both at the same time.

“It’s really a mesmerizing sight to be on the trail and view the flowing river right next to you at the same time,” Schaefer said who joined the 16-mile riders. “I was so excited to be able to join hundreds of bicyclists on a very scenic stretch of the trail and those that went to Reading got to experience one of the largest finished sections we have to date.”

This year, the 40-mile riders stopped at the Berks Nature education center in Reading. Activities at Berks Nature on Saturday and Ride for the River were both part of the 3rd annual River Days series which is organized through the Alliance for Watershed Education of the Delaware River. The event series takes place from Sept. 15 to Oct. 15. It includes a variety of events throughout the region that encourage communities to explore local trails, rivers and streams.

Ride for the River not only highlights the trail and river but t’s also a fundraiser for the trail. There are currently 75 miles of the Schuylkill River Trail completed and it will total 120 miles from Frackville to Philadelphia when finished.

After riders returned from their 16-mile or 40-mile cycling journey, they were able to enjoy the free music festival at Sly Fox Brewery. Sly Fox has partnered with Schuylkill River Greenways for the past three years by producing SRT Ale, an ale that benefits the Schuylkill River Trail. During the music festival, Sly Fox presented representatives of Schuylkill River Greenways NHA with a check of $5,630 from the sales of this year’s SRT Ale. Sales from the beer have totaled more than $18,000 and the money is used to support maintenance and improvements to the trail.

The ale has been a seasonal offering but attendees of Saturday’s music festival were the first to find out SRT Ale will now be available all year long.

“We’ve decided that it’s such a great beer and we also want to make sure we continue raising money for the trail so starting today that beer is never going to dry up again. It’s a year-round beer,” said Corey Reid, Sly Fox Brewing Company sales manager.

Know a high school or college student who wants to

We LOVE 😍 this photo of Marie Haigh's family us

🤗 THANK YOU TO EVERYONE WHO SUPPORTED SCHUYLKIL

👏 Thank you so much to everyone who shopped at

5 WAYS TO GIVE TO SRG ON #GIVINGTUESDAY (LINK IN B

👏 We want to thank all of YOU for your support