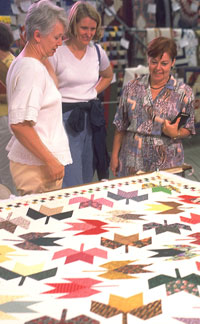 The East Penn Valley of Berks County is a region of lush farm fields, charming crossroads communities, and a rich Pennsylvania Dutch cultural tradition. The Valley is separated from the Oley Valley by a small chain of low, forested hills. The hills and the valley below have a long history of Native American inhabitation and the rock formations in the area were mined for the rich supplies of jasper and flint for weaponry. The region is also home to Crystal Cave, a unique limestone cavern believed to be one of the first geological formations opened as a tourist attraction in the early 19th century. German immigrants traveling north out of Philadelphia in the 18th century found an abundance of rich farm land in the East Penn Valley. They brought unique food, language, and architectural traditions with them and established distinctive communities in the area.
The Pennsylvania German Cultural Heritage Center and the Kutztown Pennsylvania German Festival interpret the rich and nationally significant history of this cultural group through a nationally renowned festival, museum, craft demonstrations, and special events. The East Penn Valley’s many back roads are perfect for getting lost on a sunny weekend afternoon. Many of the region’s farmers operate roadside farm stands during the summer and fall. The East Penn Valley is home to a large Mennonite Community, Kutztown University, Renninger’s Farmer’s Market, and a number of local wineries.

Places to Visit in Eastern Berks

The Kutztown Area Historical Society (KAHS) was incorporated in 1976 to serve Kutztown, Brandywine Heights, and Fleetwood. It was one of the first regional historical societies in Berks County....