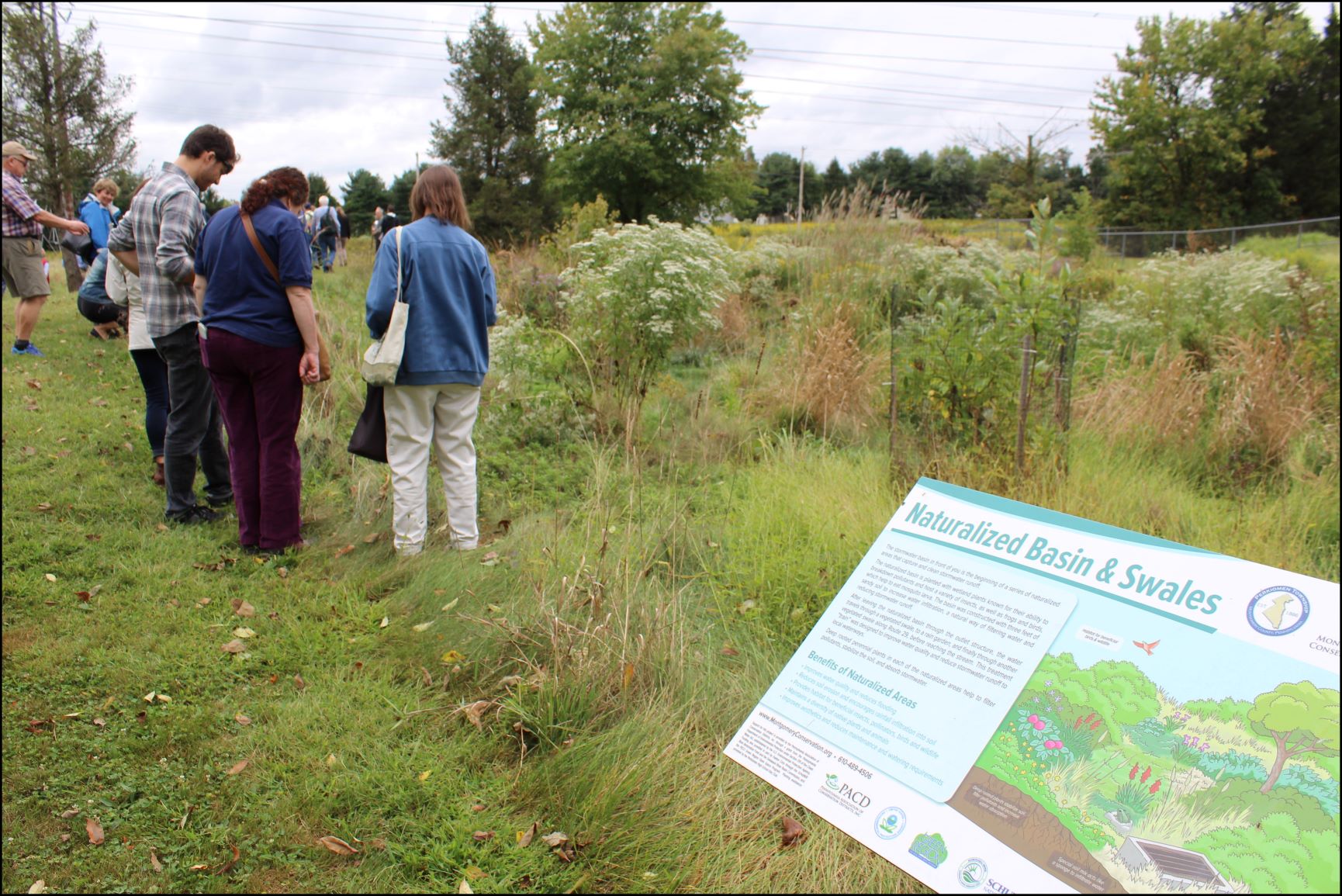 People view a naturalized basin and vegetated swale in Perkiomen Township as part of a community bus tour to explore restoration projects throughout the region. The green infrastructure was created to improve water quality and reduce stormwater runoff to local waterways.

Perkiomen Township – Participants of a community bus tour through the Perkiomen Creek Watershed saw first-hand the results of the Schuylkill River Restoration Fund and how it provides grants to projects addressing water pollution.

Restoration projects on the tour included dam removals, stormwater basins, tree plantings and more. A stop at the Perkiomen Township Building included a walk of the grounds to showcase green infrastructure such as a 3,000-square-foot rain garden, a retrofitted basin and vegetated swales.

Perkiomen Township was also the location for the official announcement of the 2019 Schuylkill River Restoration Fund recipients. The Schuylkill River Greenways National Heritage Area distributed $326,359 in grants to nine projects that will improve water conditions throughout the region. 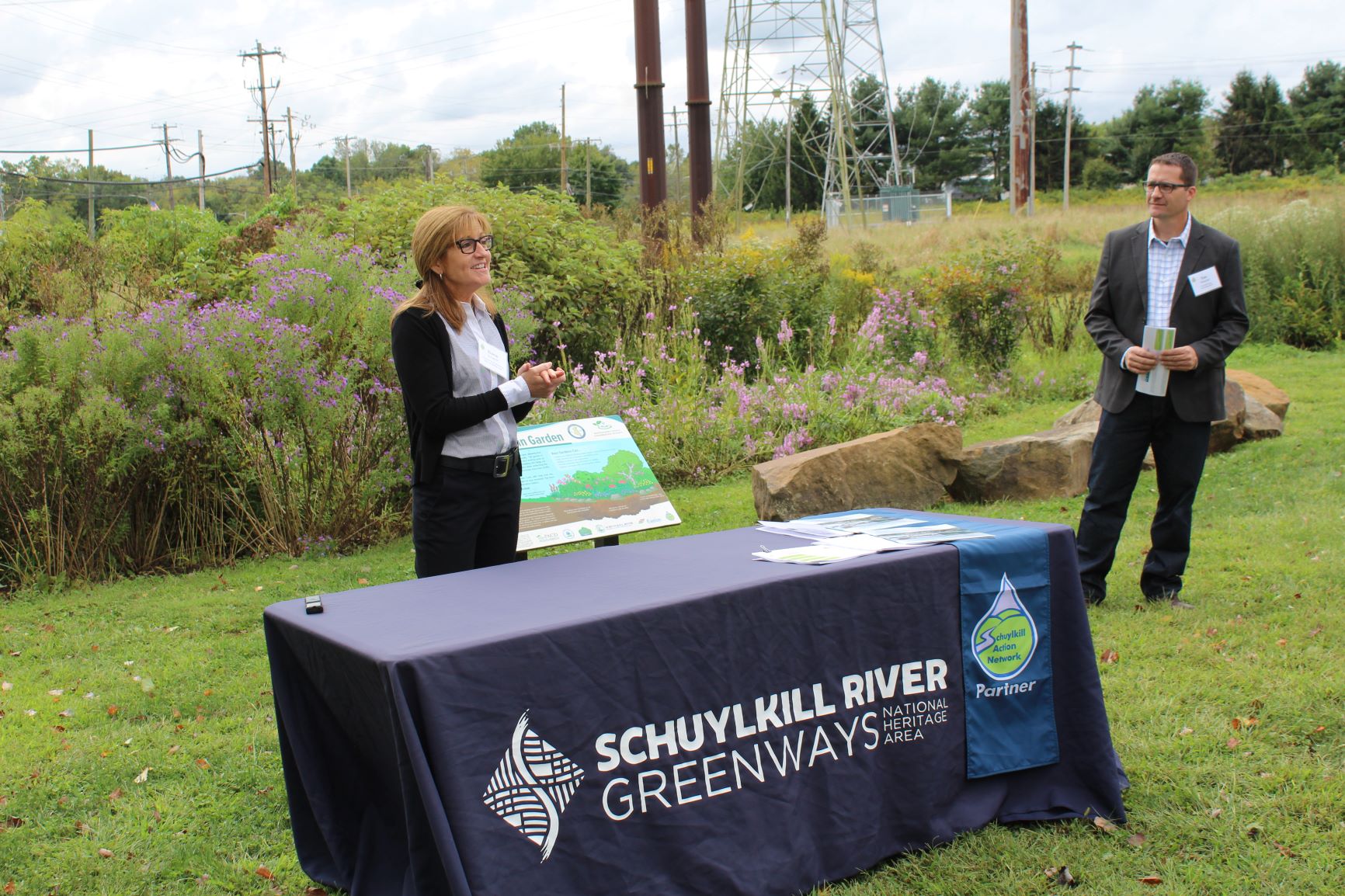 “The work that the Schuylkill River Restoration Fund does and all of the partners that participate in it is exponentially important,” said Schuylkill River Greenways NHA Executive Director Elaine Paul Schaefer during the grant announcement on Sept. 13.

Schaefer went on to say declining government funding for conservation and preservation efforts has led to environmental challenges. She expressed her gratitude to the restoration fund partners for making it possible to do “important work.”

More than $4 million has been invested into the Schuylkill River Restoration Fund since it was established in 2006. Exelon Generation’s Limerick Generating Station, the Philadelphia Water Department, Aqua Pennsylvania and MOM’s Organic Market fund the unique program. The Schuylkill River Greenways NHA oversees the fund, distributing money annually to projects that enhance water quality in the Schuylkill River Watershed. The grant program has funded 114 restoration projects and 81 of those projects have been completed. 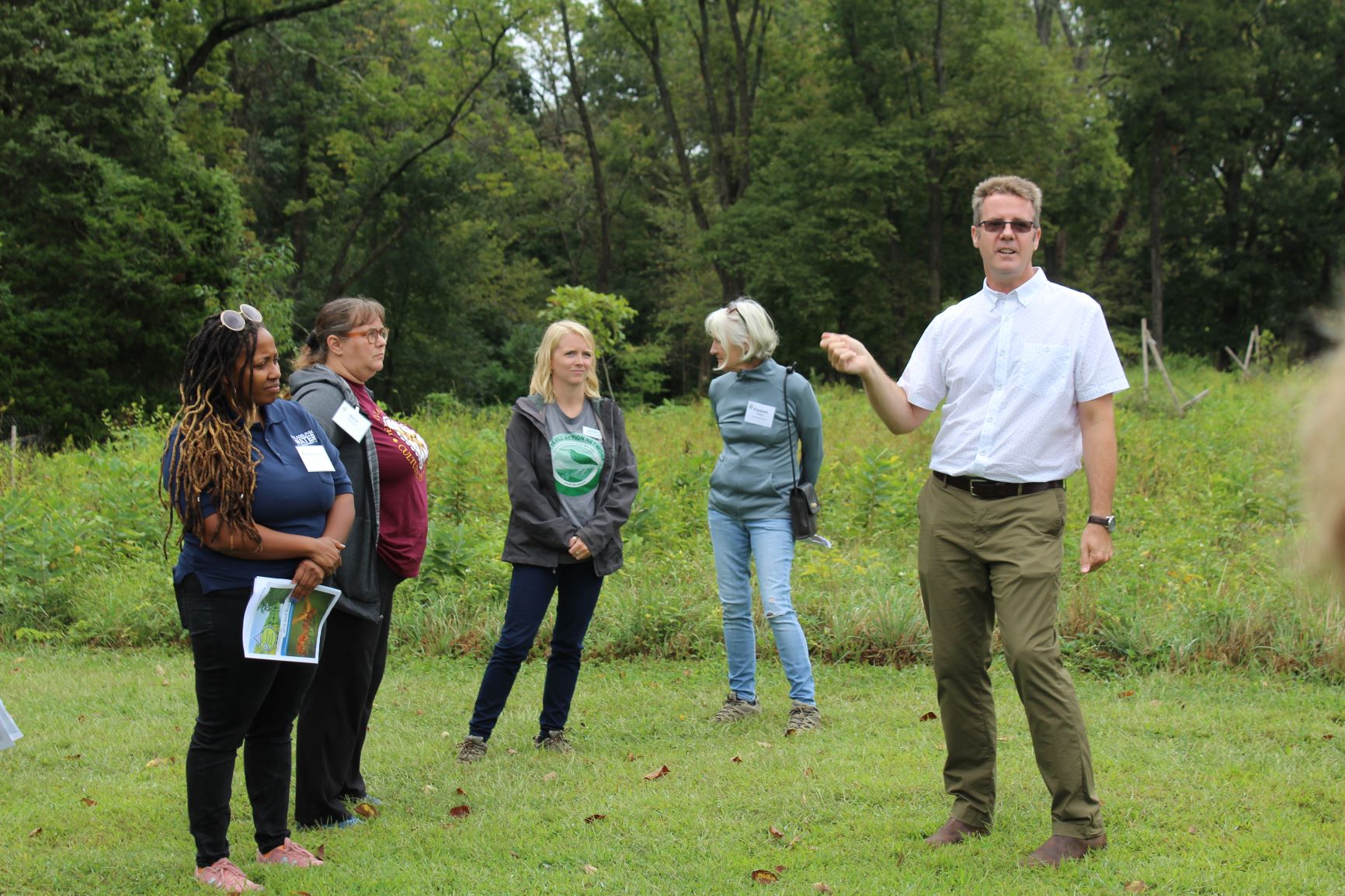 “This project is really committed to funding on-the-ground projects that will have an impact right away on the watershed,” said Schuylkill River Greenways NHA Deputy Director Tim Fenchel to a group of about 40 people during the grant announcement.

“At Exelon Generation, we believe strongly in investing in the communities where our employees work, live and serve. We are proud to support the important environmental work of the Schuylkill River Restoration Fund and the nine awarded projects that will improve the water quality of the Schuylkill River and preserve critical open space,” Sturniolo said.

Anderson said the Philadelphia Water Department provides drinking water to 1.7 million people and that about half of that water is from the Schuylkill River.

“So projects like these that are slowing water down, that are helping filter out nutrients, phosphorus sediment, pathogens, runoff; they really do make a difference and an impact in the water quality that we provide to our customers every day in the city of Philadelphia,” she said.

Scheirer said the mission of Aqua Pennsylvania is to protect “Earth’s most essential resource, meaning water.” 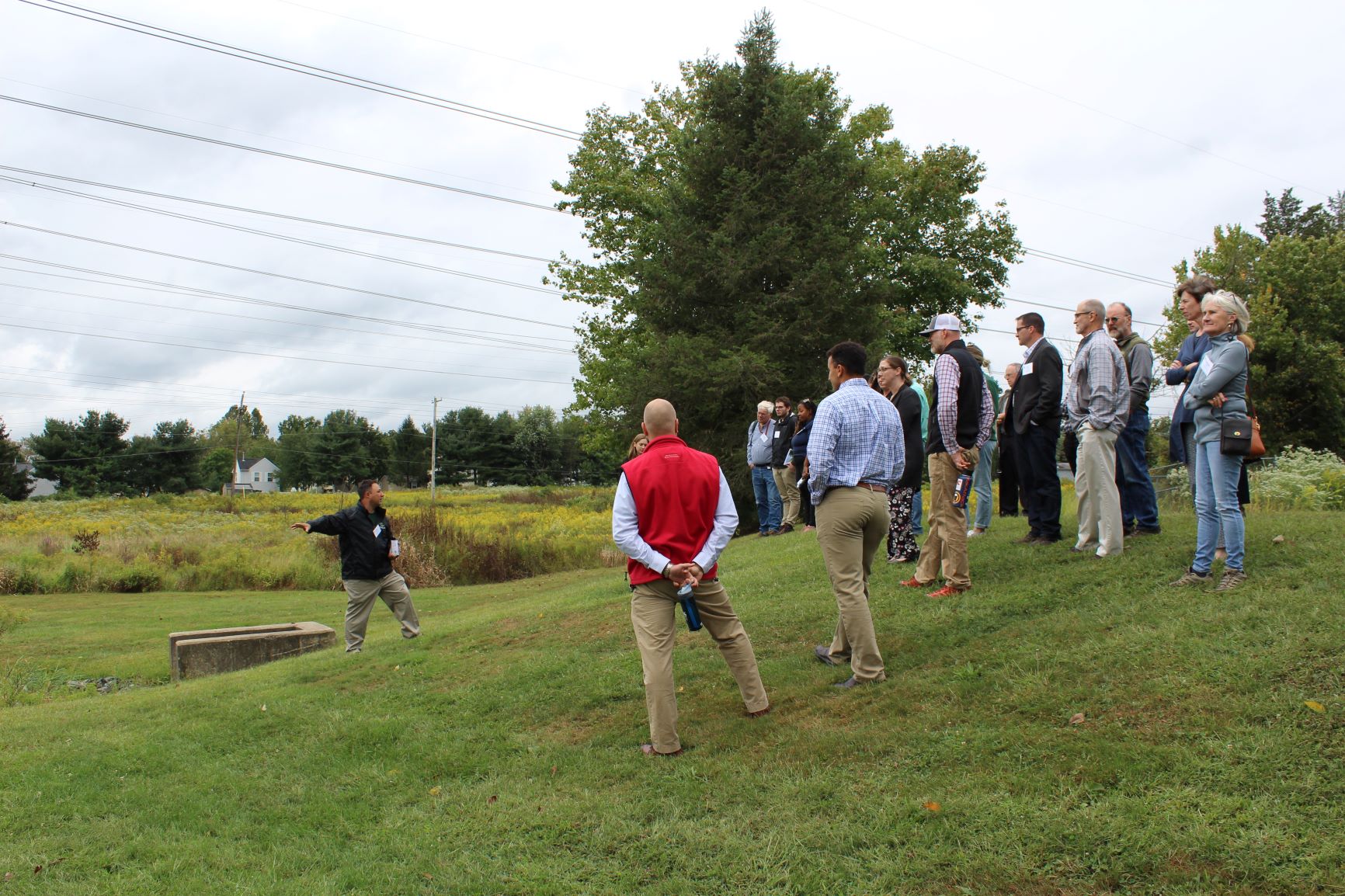 People participating in a community bus tour of restoration projects view the grounds near the Perkiomen Township Building. The green infrastructure included a rain garden, a retrofitted basin and vegetated swales.

“The Schuylkill River Restoration Fund allows Aqua to put funding into the hands of experts and leverage a ton of other resources to build on-the-ground projects that aid us in our mission,” she added.

This year, fund donations came from Exelon Generation ($190,789), Philadelphia Water Department ($100,000), Aqua PA ($50,000), MOM’s Organic Market ($3,600) and DTE Energy ($2,500). All funds not distributed this year will be rolled over into 2020. The Land Transaction Assistance Grants program provides matching grants of up to $4,000 per project to pay for costs associated with property purchases and conservation easements on high priority lands for water quality and habitat protection.

Exelon has provided over $2.8 million to the Schuylkill River Restoration Fund since it was founded; the Philadelphia Water Department has contributed $1,000,000 over the past nine years. Aqua PA has donated over $150,000, MOM’s Organic Market has donated approximately $10,000 and DTE Energy has contributed a total of $2,500