Valley Forge National Historical Park
After the cold, sickness, and hardships that General George Washington’s tired and ill-equipped Continental Army endured during their 6-month overwinter encampment here, they emerged in June of 1778 as a force to be reckoned with. They successfully engaged and drove off the British Army at the Battle of Monmouth in New Jersey … and the rest is history. This park commemorates the sacrifices and perseverance of these men and their entire Revolutionary War generation. The Visitor Center includes exhibits and collections that tell the stories of this pivotal time in American history. Guided tours, interpretive programs, and other outdoor activities are available throughout the year. Also, 28 miles of hiking, biking, and horseback riding trails lace this hallowed ground. 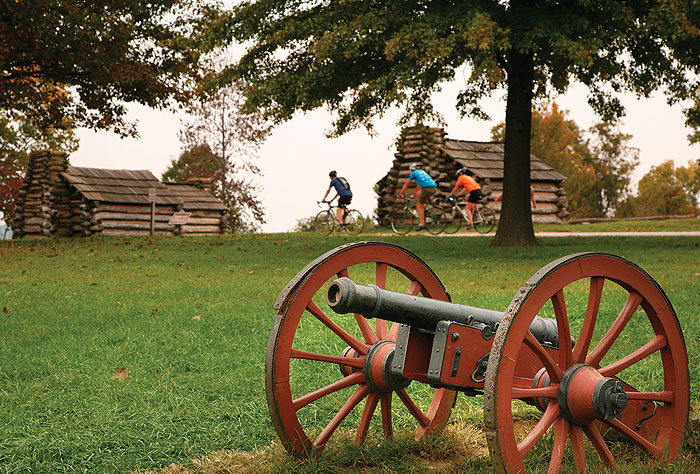 The Betzwood Landing, Schuylkill River Trail (paved), Valley Forge River Trail (unpaved), and some lesser-known historical sites are located in the northern third of the park, which is divided by the Schuylkill River as it flows east.  But the Visitor’s Center (1.0 mile south of the launch on foot or bike, 1.8 miles by car), most of the historical sites, and other hiking and biking trails are found in the southern two-thirds of the park across the recently-opened Sullivan’s (pedestrian & bike) Bridge from Betzwood Access.

Services: There are many services available outside the park. The closest are along Trooper Road, beginning 0.5 mile north of the launch.