We've Changed Our Name and Our Logo!

We have a new organizational identity! We’ve changed our name to Schuylkill River Greenways NHA and we have a brand new logo! But rest assured, our mission is still the same!

Both the new name and the logo, are reflective of our mission to connect people and communities to the river and the river corridor. The new logo’s green and blue graphic represents fields and towns with a river running through the center. It replaces an old logo with an encircled image of sun and water. 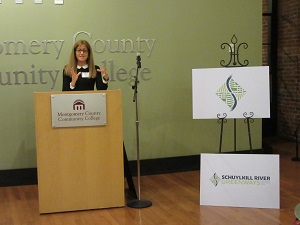 We have changed our name and our logo, but we are not changing what we do,” said Schuylkill River Greenways Executive Director Elaine P. Schaefer. “Our new identity better represents the work we do, building and promoting the Schuylkill River Trail, championing the river and revitalizing the communities along it.

The new name and logo was announced on November 15 at our annual Scenes of the Schuylkill Art Show reception, which also serves as our membership meeting. Over time, will be updating all of our signage and web presence with our new logo.