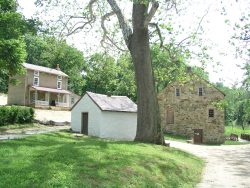 Chester County is located in southeastern Pennsylvania and borders Maryland.  It was one of the three original counties established by William Penn in 1682 after he founded the Pennsylvania Colony. Milling was the county’s first industry due to readily available water power. The iron industry also thrived which lead to connections to the Pennsylvania Railroad. Chester County is rich in history as can be seen at places like Valley Forge. The American Revolutionary War came to the area in 1777 when the British Army launched a surprise attack in the area while on route to Philadelphia. Chester County has much to offer including rolling hills, Victorian-style estates and beautiful farmland.

Sites on the Trail in Chester County

Built in 1903 as a Vaudeville House, the “Colonial Opera House” brought professional shows and live entertainment to Phoenixville for the first time. Real movie buffs know that the...

Fricks Locks National Register Historic District is open for tours every other Saturday from May through October. Check back for 2018 tour schedule. About Fricks Locks Village The restored...

The Historical Society of Phoenixville Area contains exhibits selected from their growing collection of artifacts and documents. Permanent exhibits include Etruscan majolica, which was made in Phoenixville in the...

The Phoenixville Foundry is a model of historic preservation in the Schuylkill River valley. The Phoenix Iron Company Foundry was built in 1882 and was home of the famous...