Directions:
The Colonial Theatre is located at 227 Bridge Street in the heart of the historic business district of Phoenixville. 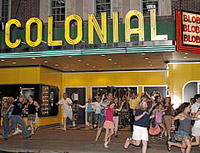 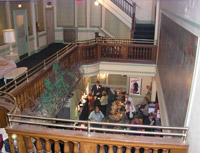 Built in 1903 as a Vaudeville House, the “Colonial Opera House” brought professional shows and live entertainment to Phoenixville for the first time. Real movie buffs know that the Colonial was featured in the classic 1958 science fiction movie, The Blob, starring Steve McQueen and filmed around Phoenixville, Downingtown, Chester Springs and Royersford.

Since then, the Colonial Theatre has played a significant role in the lives of many people in our community. When the former owner decided to sell, it was time to forever protect the legacy of the Colonial for future generations. Most recently the Colonial was home to a Kimball pipe organ installed in 1975 and used for silent movies and pre-show recitals. The organ was sold to the Chicago Historical Society, but we are currently working to install an organ in the theatre and to once again have live organ concerts in Phoenixville.

The Colonial reopened in 1999, and is owned and operated by the Association for the Colonial Theatre (ACT), a nonprofit corporation. ACT is committed to the full restoration of the Colonial as a cultural arts center.