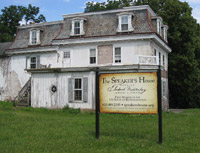 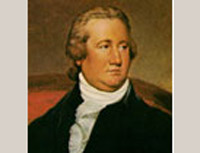 Frederick Augustus Conrad Muhlenberg, second son of renowned Lutheran pastor Henry Melchior Muhlenberg, was born in Trappe, Pennsylvania, on January 1, 1750. Sent with his brothers Peter and Henry to the University of Halle, Germany, in 1763, Frederick returned to America in 1770 and was ordained a Lutheran minister. On October 15, 1771, Frederick married Catherine Schaeffer, the daughter of wealthy Philadelphia sugar refiner David Schaeffer.

In 1999 a grassroots effort led by local citizens saved from demolition the former residence of Frederick Muhlenberg. After gaining non-profit status, the board embarked on an awareness-raising campaign in order to raise the funds necessary to purchase the building. The first fund raising event was hosted by then-Speaker of the House Dennis Hastert.

In 2006, the Montgomery County Commissioners granted The Speaker’s House $415,000 to purchase the 1.9 acre property and house through the Green Towns/Green Fields program, placing the property under a conservation easement in order to ensure that it is permanently preserved as open space.