Directions:
Awbury Arboretum is located in East Germantown, on both sides of Washington Lane between Chew Avenue and Ardleigh Street. The entrance to the Francis Cope House and Arboretum, is off Chew Avenue between Washington Lane & Haines Street. Public transportation to Awbury includes the R7-Chestnut Hill East train (Washington Lane Station) and the XH and 18 buses.

The Arboretum is open year round from sunrise to sunset. 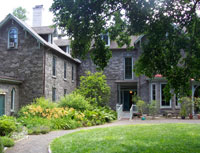 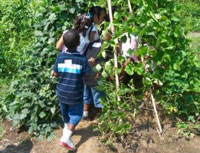 Located on 55 acres of beautiful scenery located in the Germantown section of Philadelphia, the arboretum’s mission is to preserve and interpret The Francis Cope House, Awbury’s historic house, and landscape, connecting an urban community with nature and history.

Awbury began in 1852 when Henry Cope, a Philadelphia ship owner, bought a piece of farm land in Germantown to build a summer house for his family. A whole community of houses were built by various members of the Cope Family over several generations. The estate was named after the village, Avebury, England, from which his family originally emigrated and soon became a year-round home for members of the extended Cope family.

By World War I, Awbury was becoming an island of green space surrounded by blocks of houses. In 1916, fifty-five acres were preserved through the establishment of Awbury Arboretum as a public park. Twenty-four of the Awbury houses are listed on the National Register of Historic places as part of the Awbury Historic District, established in 2001.

The Awbury houses are particularly significant because they illustrate a range of architectural styles-Gothic Revival, Queen Anne, and Tudor Revival, for example-that were popular from 1850 to the 1920’s.

The houses are clustered in a landscape of lawns, gardens, shrubs, and woodlands laid out in the 19th century English landscape garden tradition. In the 20th century additional landscape architecture was provided by the firm of Harrison, Mertz & Emlen. The landscapes, including former farmlands, are important features of the Awbury Historic District.