Directions:
From the Philadelphia Art Museum driveway, turn left at the traffic light onto Kelly Drive. About a mile beyond the Lincoln Statue, turn right at the Grant Monument equestrian statue (Fountain Green Drive) and take the first left onto Mount Pleasant Drive. Continue around the Laurel Hill loop. Go through the stop sign and take the second left (just before 33rd Street). 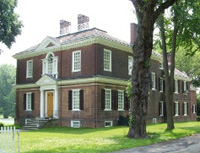 Woodford is a fine example of late Georgian architecture and one of the earliest surviving in the Philadelphia area. It contains all the elements associated with this style such as brick construction using the Flemish bond pattern, a Palladian window, pedimented front, Chippendale roof balustrade and symmetrical facade.

The first owner, Judge William Coleman, Justice of the Provincial Pennsylvania Supreme Court, was a Quaker and Franklin’s confidant. After his death in 1769, the house became a Tory residence – first with Alexander Barclay, King George III’s Controller of Customs at the Port of Philadelphia, and later as the home of Rebecca Franks, beautiful daughter of a highly placed father, David Franks. Franks added the second floor, with an unusual stair hall, and a Palladian window above the nine-foot high entrance doors. Franks was exiled in 1780 because of his Tory activities, and Woodford reverted to Quaker ownership. The Wharton family held it for several generations until it became part of Fairmount Park in 1868.

Woodford is best known, however, for its eye-popping decorative arts accumulated primarily by Miss Naomi Wood who made it her life’s work to collect antiques. The guest at once experiences the feeling of affluent Colonial life, as though Benjamin Franklin, who had been a frequent visitor, just stepped from the finely carved and paneled parlor.