Directions:
From the Philadelphia Art Museum driveway, turn left at the traffic light onto Kelly Drive. About a mile beyond the Lincoln Statue, turn right at the Grant Monument equestrian statue (Fountain Green Drive) and take the first left onto Mount Pleasant Drive. Continue on Fountain Green Drive (which becomes Reservoir Drive) and make a left onto Randolph Drive. 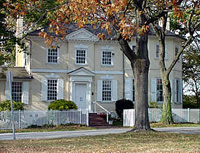 Discover the surprising and true story of Rebecca Rawle, a wealthy widow, who built this small country house in the Georgian style around 1764. After Rawle’s second marriage to Philadelphia mayor Samuel Shoemaker, she lost her house during the American Revolution when the state legislator seized it because she and her husband were British Loyalists. Rawle successfully regained her property.

In 1828 the mansion passed into the ownership of Dr. Philip Syng Physick. Upon his death, it was left “in trust” to his daughter, Sally Randolph. In 1869 The City of Phialdelphia bought Laurel Hill in the process of creating Fairmount Park.

Must See: The view from the back porch overlooking the Schuylkill River.