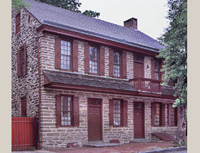 Built in 1744 as a country summer home by wine importer John Wister, Grumblethorpe was originally known as “John Wister’s Big House” because it had multiple stories. Built from stone quarried on and oak cut from the Wisters’ extensive property, the house is a prime example of domestic Pennsylvania German architecture of the period. Intended as a summer retreat, the house was occupied also in winter in the year 1793 when the Wister family sought refuge from the yellow fever epidemic raging in Philadelphia. In the early 19th century, Charles Jones Wister I, grandson of John, made it his year-round residence. The family retained ownership until the 1950’s.

Members of the Wister family are known for their contributions to American literature, horticulture, historic preservation, and astronomy. Owen Wister, the author of the well-known novel of the American west, The Virginian lived nearby and spent summers in his youth there. Sally Wister, who lived in the house during the Revolution, kept a diary of her experience and perspective on the changing nation. Her diary remains in publication today and provides insight into the thoughts of teenagers in the 18th century. Charles Jones Wister, who named the house Grumblethorpe after reading the humorous 19th century book Thinks I to Myself, was known for his finely-crafted scientific tools and his broad knowledge of the sciences. Charles kept a weather diary and recorded the weather every day for decades. Today, these records are still used by forecasters in the Philadelphia region as a benchmark for declaring the hottest or coldest day on record.

Period furnishings and the personal property of the Wister family who occupied the home for over one hundred and sixty years are displayed throughout the house. The large gardens surrounding the house have been restored to resemble the gardens as they appeared when Charles Wister, John Wister’s grandson, inhabited the home.