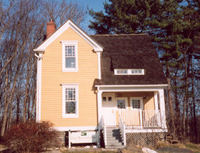 The Lower Merion Preservation Trust was formed in 1991, the outgrowth of a Lower Merion Township study on disappearing open spaces. LMPT organized to advocate for the preservation of landscapes and community character, and grew to embrace protection of historic resources as well. The trust invested extensive energy in contacting owners of large properties, arranging for these properties to be set aside in perpetuity.

In 1997 the Conservancy decided to raise funds to restore the 1895 caretaker’s cottage at Rolling Hill Park. The cottage, completely restored by May 2000, now serves as the headquarters of the Conservancy.