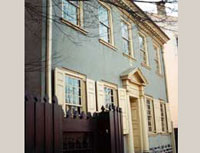 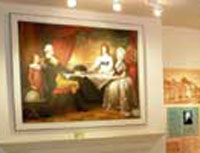 The house was built in 1772 by merchant David Deshler, and a mere five years later it was in the middle of the raging Battle of Germantown. British General Sir William Howe occupied the house after the Battle.

In 1793 the Yellow Fever epidemic swept through the capital of Philadelphia, and people from all over the city sought refuge in the country. President George Washington and his cabinet escaped the Fever in Germantown. During November, 1793, Washington lived in the house and met with his cabinet. Much official and important business went on in the so-called “Germantown White House.”

Colonel Franks, the second owner of the house, and the President had some disagreements about the rent and costs along the way. Franks charged Washington $131.56, which included Franks’ traveling costs to and from Bethlehem, the cost of furniture and bedding for his own family, the loss of a flatiron, one fork, four plates, three ducks, four fowl, a bushel of potatoes, and one hundred bushels of hay. Despite these extra costs, Washington returned to the house the next summer with his family.

Later the house was sold to Elliston and John Perot, and in 1834 to Elliston’s son-in-law, Samuel B. Morris. Inside the house there is a portrait of the earlier Samuel Morris, signed by Washington. The Morris family lived in the house for over one hundred years before donating it to the National Park Service in 1948. Information courtesy of ushistory.org

The Germantown White House reopened in July 2009 after a year and a half closure for major repairs. The site now features new exhibits that tell the story of the Battle of Germantown, the First Family and the entire household, including enslaved Africans.