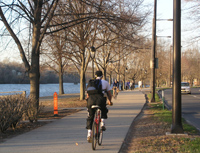 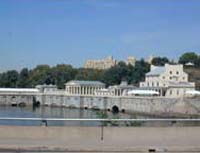 Fairmount Park was officially founded in 1855 when the Lemon Hill estate was dedicated as a public park and renamed Fairmount Park. Support came from 2,400 citizens who signed a petition urging the purchase of Lemon Hill.

Unlike New York City’s Central Park with its man-made landscapes, Fairmount Park evolved through the absorption of older estates, their tree groves and open meadowland without significant alterations.

Victorian park planners sought calming experiences and activities for park visitors. Compare this to today’s more athletic uses of the park. The park design attempted to discourage rowdiness by fostering reflection and access to healthy air and water. By the end of the 19th century, the Fairmount Park Commission began to accommodate the complex needs of the public, adding rather than limiting the scope of its recreation facilities and resources. The automobile, in particular, challenged the mission of the park as a place for quiet and recreation. On the other hand, it allowed greater access to the park, ushering in a new generation of park users.

Fairmount Park is operated by the Philadelphia Parks & Recreation Department.