Directions:
Fort Washington State Park lies between the towns of Fort Washington and Flourtown along the Bethlehem Pike. It is about two miles from PA Turnpike Exit 399. 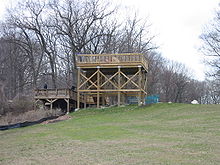 Birders enjoy the seasonal migration of raptors along Militia Hill from the Observation Deck. All 16 species of raptors that migrate on the East Coast can be seen here. The “Watch” begins on September 1st and lasts through October 31st. Volunteer compilers are on duty every day, 9 a.m. to 5 p.m., counting raptors that migrate past the deck. For more information, or to bring a group to the Hawk Watch Observation Deck, call 215-591-5250.

The park also contains an organized group tent camping area, available year round and reserved specifically for large groups. See official website to make reservations. No other camping is available on site.

Fort Washington State Park and the community of Fort Washington take their name from the temporary fort built here by soldiers of the American Revolution in the fall of 1777. Whitemarsh, as the area was called then, was the scene of the encampment of 12,000 soldiers of General Washington’s army from November 2 until December 11, 1777.

The British marched out from Philadelphia on December 5 to try to engage the Americans in battle. Howe led his army back on December 8.

Knowing his poorly clad men needed better quarters, and also to protect the iron forges and foundries in the Schuylkill Valley, Washington left Whitemarsh on December 11, 1777, and marched the Continental Army to Valley Forge.

Managed by the PA Department of Conservation and Natural Resources