The trail is a nominee for the 2022 USA Today Best Riverwalk Contest. Vote once a day until April 11, 2022. CLICK HERE TO VOTE NOW!

Directions:
Pennsylvania Turnpike exit 339 (Fort Washington). After toll, stay left and follow the road to end. Left onto Bethlehem Pike. Shortly after crossing beneath the highway, Hope Lodge is on your left.

Open for tours on the 3rd Sunday of each month from April through October, plus additional evening tours during the summer. Please visit their official web site for updates. 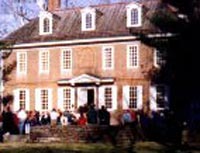 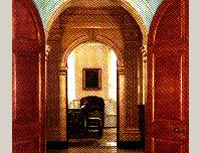 Hope Lodge was built between 1743 and 1748 by Samuel Morris, a prosperous Quaker entrepreneur. Morris acted as a farmer, shipowner, miller, ironmaster, shopowner, and owner of the mill now known as Mather Mill.

Hope Lodge is an excellent example of early Georgian architecture, and it is possible that Edmund Woolley, architect of Independence Hall, offered advice in building. Samuel Morris owned the estate until his death in 1770, when it was inherited by his brother Joshua. Joshua in turn sold the property and dwelling to another Philadelphia merchant, William West.

You will see two time periods represented in the house. Some rooms are shown in the Colonial era, 1743 to 1770, when the house was first built. Other rooms are shown as the house was lived in by the last private owners, William and Alice Degn, from 1922 to 1953. Although the Colonial period had been over for a century, the Degns decorated with colonial objects to preserve both the objects and the house. This style of furnishing is now known as Colonial Revival.

In 1957 the Hope Lodge Foundation transferred the property to the Commonwealth of Pennsylvania and Hope Lodge is today owned and operated by the Pennsylvania Historical and Museum Commission.