Directions:
From the Philadelphia Art Museum driveway, turn right at the traffic light and pass in front of the Museum. Get onto West River Drive from the middle-right lane. After about 1.3 miles turn left onto Sweetbriar Drive, and then turn right onto Landsdowne Drive. Take the first right at the top of the hill and proceed to the stop sign. Facing the Civil War Memorial, take the second right and either go straight to Sweetbriar.

Sweetbriar is currently closed to the public due to staffing issues. Please check official website in the coming months for the new schedule. 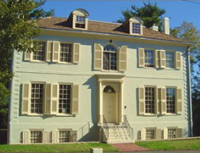 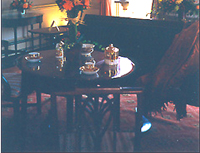 Get a glimpse of the cosmopolitan life at Sweetbriar, the year-round home of Samuel Breck, who was intimately involved in the development of the city and was active in founding a public school system. He was also famous for entertaining the movers and shakers of his time at his elegant villa, including distinguished French emigrés Joseph Bonaparte and Marquis de Lafayette. He was a patron of artist-naturalist John Audubon and supported many philanthropic community projects. Breck published extensive diaries describing his life in Philadelphia.

The present furnishings, reflect the fine taste of Samuel Breck who had traveled and studied abroad and returned home with different concepts of gracious living.

Sweetbriar was incorporated into “Faire Mount” Park in 1868 and bordered the 1876 Centennial Exhibition site. Restored in 1932 by the Junior League of Philadelphia and in 1976 by the City of Philadelphia, Sweetbriar is operated by the Modern Club of Philadelphia.

Must See: The elegant “Etruscan” room