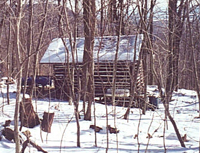 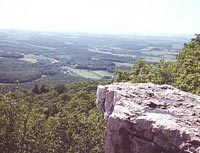 The Blue Mountain Eagle Climbing Club works to maintain over 64 miles of the Appalachian Trail in Berks, Schuylkill, and Lehigh Counties.

On June 15, 1916, Dr. Harry F. Rentschler took a group of men from the Reading, PA area who liked to walk in the mountains to an eagle’s nest on the Blue Mountains above Shartlesville. They enjoyed the climb so much that they planned to revisit the eagle’s nest and the Blue Mountain eagle became the symbol for their climbs.

They formed the Blue Mountain Eagle Climbing Club on October 12, 1916, when the first official hike was held to the eagle’s nest. William F Shanaman was elected president of the new club and Dr. Rentschler was named secretary.

In 1926, planners of the Appalachian Trail asked the Club members if they would locate and build 102 miles of trail through the wilderness along the mountaintop from the Lehigh River to the Susquehanna River. Monuments, cabins, and rest stops were built along the way. After five years of volunteer labor, dedication of the completed section was held on October 12, 1931.