Directions:
The Independence Visitor Center is located at the northwest corner of 6th and Market St. in Old City Philadelphia.

Tour Tickets Required for Independence Hall and the Liberty Bell. Free tickets available the morning of your visit at the Independence Visitor Center. 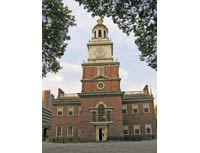 Independence National Historical Park, located in Old City Philadelphia is among the most historically significant places in the United States and the World. The Park is home to the Liberty Bell, an international symbol of freedom, and Independnce Hall, where the Declaration of Independence and Constitution were written, debated, and signed. The 45 acre urban park tells the story of America’s founding and the struggles that the young nation faced as we established ourselves as a people.

Visitors will find a variety of activities for all ages and interests. Aside from the Liberty Bell and Independence Hall, you can visit the Second Bank of the United States to learn more about Philadelphia at the end of the 18th century and view portriats of America’s most prominent people by some of America’s earliest masters. Carpenter’s Hall was the site of the First Continental Congress and is the home of the nation’s first and oldest trade union, the Carpenter’s Company of the City and County of Philadelphia. The Park is also home to Franklin Court, the First Bank of the United States, the Merchant’s Exhange, and other indoor and outdoor sites for you to enjoy.

Throughout the Spring and Summer months there are costumed interperters and storytellers throughout the park bringing th people and places to life. Children are invited to muster into the Continental Army or have a chat with Benjamin Franklin ant Thomas Jefferson.