Directions:
The Powel House is located half a block southeast of Independence National Historical Park, in the heart of Society Hill. 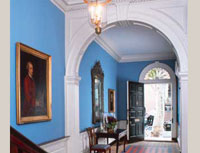 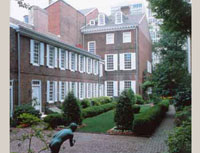 Visitors can stroll through the room where the Washingtons danced on their wedding anniversary, ponder the sumptuous meals served in the Powels’ dining room, sit in the parlor where political ideas were debated over tea and Madeira wine, and relax in the elegant colonial garden.

Built in 1765 by merchant and businessman Charles Stedman, this elegant Georgian brick mansion was purchased by Samuel Powel in 1769 at the time of his marriage to Elizabeth Willing. Samuel Powel, an important, educated man who had toured the Continent for seven years before settling down, served as the last mayor of Philadelphia under the Crown and was the first mayor of the city after the creation of the United States. Mayor Powel was later dubbed the “Patriot Mayor”. Mayor Powel and his wife were well known for their hospitality and frequently entertained such notable guests as George Washington, John Adams, Benjamin Rush, Benjamin Franklin, and the Marquis de Lafayette.

During the early 20th century, the house served as a warehouse and office for a business that imported and exported Russian and Siberian horse hair and bristles.