Directions:
17 miles north of Philadelphia off Route 73, between Bethlehem and Butler Pikes, in Fort Washington, PA.

Tours of the Mansion and Gardens are offered each weekday at 1:30, other times by appointment only. A call prior to your visit is recommended to ensure docent availability. 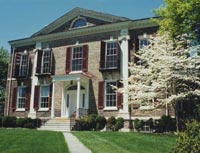 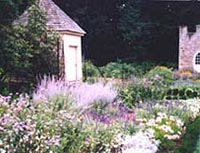 Wishing to provide his family with a refuge from the yellow fever epidemics sweeping Philadelphia, Anthony Morris (1766-1860), a wealthy politician and merchant, purchased just over 200 acres of land in Whitemarsh, Montgomery County, in 1794. Construction of the elaborate country estate, “The Highlands” was completed by 1796. Morris suffered extreme financial difficulties and in 1808 was forced to sell The Highlands to Daniel Hitner (1765-1841). Hitner sold the property and its accumulated 300+ acres to a Philadelphia wine merchant, George Sheaff (1779-1851) in 1813.

In 1917, two years after the death of the last Sheaff heir, the property was sold to Miss Caroline Sinkler (1860-1949), a native South Carolinian with strong ties to Philadelphia. The house and gardens had deteriorated, but through the efforts of Miss Sinkler, the property regained its elegance and prominence as an historical treasure.

In 1975 The Highlands Historical Society formed to preserve, restore and interpret the historic mansion and grounds from 1794 to the present. Today, The Highlands is recreating the spirit of the Sinkler garden based on letters, photographs and the survey that Caroline Sinkler commissioned in 1917.