Directions:
Lemon Hill Mansion is located at the intersection of Lemon Hill Drive and Sedgeley Drive in East Fairmount Park near the Philadelphia Museum of Art, Kelly Drive, and Boathouse Row. 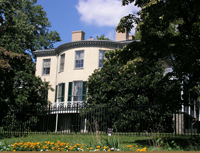 Robert Morris, signer of the Declaration of Independence and close friend of George Washington, purchased 350 acres along the banks of the Schuylkill River in July 1770.

In 1798, Henry Pratt, son of a Philadelphia portrait painter, bought the property and developed it into one of the finest garden spots in Philadelphia. Lemon trees in the greenhouses contributed to the estate being known as “Lemon Hill.”

Pratt built the present house in 1800. Lemon Hill, a graceful masterpiece of late 18th century architecture, is a formal Early Republic/Federal house with features that include a two story symmetrical plan, stone basement, scored stucco walls and chimneys, two wooden side porches and a shingled hip roof. Its distinctive features are the projecting three story oval rooms on the south, facing the Schuylkill River and the entrance hall checkerboard floor made of Valley Forge marble.

In 1844, the house and 45 acres were purchased by the City of Philadelphia and became part of Fairmount Park. The City restored the house in 1926 and again in 1976.

The Friends of Lemon Hill formed in 1987 to raise funds and carry out projects to preserve, promote, and protect Lemon Hill Mansion and its grounds.