Fort Mifflin on the Delaware 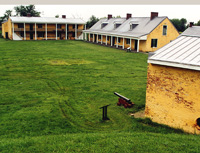 British engineer John Montresor was commissioned to begin construction for a fort at the southern edge of Philadelphia on the Delaware River to protect the city from invasion.

Following the adoption of the Declaration of Independence, Benjamin Franklin headed a committee to provide for the defense of Philadelphia. At that time the British had only completed the granite southern and eastern walls of Fort Mifflin.

After the defeat of Washington at the Battle of Brandywine, the British took control of Philadelphia in September 1777, then laid siege to Fort Mifflin early October 1777. The American troops were forced out Nov. 15, 1777 and George Washington retreated to Valley Forge. During the American Revolutionary War the fort was a centerpiece of the British conquest of Philadelphia and was rebuilt 1798-1800 under the presidency of John Adams.

Many of the buildings standing today are holdovers from the post-1795 construction. The white stone walls date to the pre-revolutionary war British construction. Evidence of the British 1777 bombardment can be seen in its pock marked damage to the face of the stone walls.

During the Civil War, Fort Mifflin was used to house Confederate prisoners of war, Union soldiers and civilians accused of breaking the law.

From March through October, weekend tours by Tour Guides dressed in period dress, along with uniform and weapons demonstration.