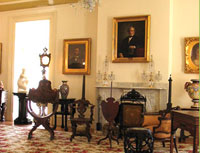 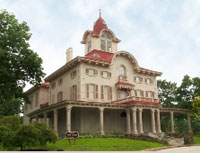 Like most things Victorian, the Ryerss Museum and Library is very eclectic. From opium pipes to stuffed alligators, the Ryerss collection gives visitors insight into a family who traveled the globe and brought back fascinating objects (particularly from the Orient) in order to enlighten Philadelphia citizen’s of far away cultures.

Live vicariously through the life of the housekeeper who married the wealthy bachelor, became a widow eight months later, and then ventured off to exotic locales. Spend time picking out your favorite quirky item in the museum or peruse the collection of current best sellers, children’s books, nonfiction tomes, Victorian reference works and magazines at the community lending library on the second floor.

The Ryerss had a great love of animals and were active in the founding of the Society for the Prevention of Cruelty to Animals in Philadelphia and the Ryerss Farm for Aged Equines, a retirement home for horses founded by the family in the late 19th century and now located south of Pottstown. Some of the Ryerss pets are buried with their headstones under a tree on the west side of the mansion, and their portraits are displayed throughout the Museum and Library.