Directions:
From the Philadelphia Art Museum driveway, turn left at the traffic light onto Kelly Drive. About a mile beyond the Lincoln Statue, turn right at the Grant Monument equestrian statue (Fountain Green Drive) and take the first left onto Mount Pleasant Drive. To reach Laurel Hill, continue on Fountain Green Drive (which becomes Reservoir Drive) and make a left onto Randolph Drive. To reach Strawberry Mansion from Laurel Hill, continue around the Laurel Hill loop. Go through the stop sign and take the second left (just before 33rd Street).

The mansion is currently closed due to preservation until further notice. 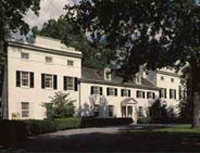 Formerly known as “Summerville,” the center section of Strawberry Mansion was built in the Federal style around 1790 by renowned lawyer Judge William Lewis, who drafted the first law in the United States abolishing slavery. The mansion’s second owner, Judge Joseph Hemphill, added the Greek Revival wings during the 1820s.

Layer upon layer of history are celebrated at Strawberry Mansion – both literally and figuratively. Two large floors are filled with an impressive array of furniture and decorative arts from different time periods, while the attic is chock full of antique toys and a doll collection. (A fine place to share some memories with your grandchildren).

Judge Joseph Hemphill bought ‘Summerville’ in the 1820’s. He added the flamboyant Greek revival wings to the house and entertained John C. Calhoun of South Carolina, the French Marquis de Lafayette and Daniel Webster of Massachusetts. His son Coleman built a race track on the property, raised Dalmatian dogs and grew strawberries from roots he imported from Chile.

After its 1871 purchase by the city of Philadelphia, the house became the site of an important steamboat landing. With its “magnificent perspective of the river and the surrounding country,” it soon became a popular restaurant featuring strawberries and cream on the menu—thus it was renamed “Strawberry Mansion.” Must See: The unique doll collection.