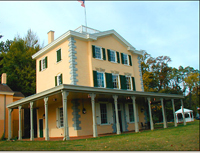 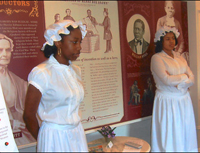 Historic Belmont Mansion provides the setting for the story of the Fairmount Park area of Philadelphia from colonization to the present. The property around Belmont Mansion was initially a group of farms. William Peters, an English lawyer and land management agent for the Penn family, bought the property in 1742. Peters designed and built Belmont Mansion, and he created formal gardens surrounding the Mansion.

The property became part of Fairmount Park in 1869 as part of a program to preserve the quality of water. In anticipation of the Philadelphia Centennial Exposition in 1876, a large dining pavilion was built alongside Belmont Mansion. The site continued to be used for public entertaining until it became an historic house museum under the management of the American Women’s Heritage Society in 1986.

The Belmont Mansion property became part of Fairmount Park in 1869, and is now an underground railroad museum open to the public for tours.