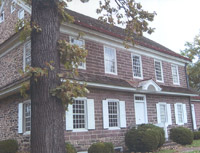 The manor house exemplifies the restrained elegance of early Georgian architecture popular with wealthy English gentry during the mid-18th century. Built in 1752, the mansion was situated on a 1,000 acre plantation, which by 1762 included the town of “Pottsgrove.”

Although only four acres of original property remain today, Pottsgrove Manor has lost none of its original charm and architectural beauty. The sandstone exterior, elegant interior and fine furnishings reflect the eminence that the Potts family had attained before selling the property in 1783. The mansion has been restored to recreate the lifestyle and times of the Potts family.

John Potts’ Pottsgrove plantation began as one of the many iron forges and furnaces throughout southeastern Pennsylvania. Ten years later, it encompassed not only an iron factory, but other businesses such as a tavern, a store, a brewery, mills, shops, and homes that eventually became John Potts’ Town.