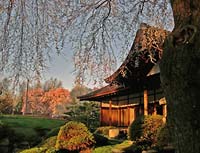 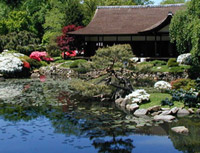 This shoin-zukuri (desk-centered) house, built in 16th century style, is located on the grounds of the Horticultural Center in the West Philadelphia section of Fairmount Park.

The ground on which the Japanese House now stands has had a Japanese structure and landscaping almost continuously since the 1876 Centennial Exposition, when the Japanese Bazaar and garden were in the area.

From 1905 until a fire in 1955, the site was occupied by a gate from a Japanese Buddhist temple, built in the early seventeenth century. This gate had been brought to the United States for the 1904 Louisiana Purchase Exhibition in St. Louis.

The Japanese House was designed by Yoshimura Junzoo, built in 1953 in Nagoya, and presented by the America-Japan Society of Tokyo to the Museum of Modern Art New York for exhibition in 1954-55. It was given to the City of Philadelphia and reassembled at the current site in 1958, with a garden designed by Sano Tansai.

The house and garden underwent extensive repairs, as a gift from the Japanese government and people in honor of the U.S. Bicentennial, in 1976. In 1982 the Friends of the Japanese House and Garden organized to preserve this unique facility. In the same year, a grant from the Pennsylvania Horticultural Society made it possible to begin rejuvenation of the garden. Repairs and renovations continue to be undertaken by the Friends on a regular basis.

Please note: Because it reflects conditions of 17th century Japan, the Pine Breeze Villa is not easily accessible to users of wheelchairs, walkers, or canes.