The Beidler House is open to the public for special events about the history of the house, mill and aqueduct conducted by costumed guides. 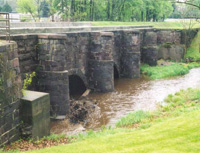 The Allegheny Aqueduct was built by the Schuylkill Navigation Company in 1824 under the direction of Engineer Ephriam Beech. This “bridge for boats” was needed because the Allegheny Creek could not be incorporated into the canal system.

The Schuylkill Canal, a slackwater navigation system, began at Mill Creek, Schuylkill County, and traveled to its destination in Philadelphia; both the canal and the aqueduct ceased to be used as a transportation system in 1931.

The aqueduct is a massive 112 1/2 foot structure consisting of five red sandstone and brownstone arches done with the “keystone” theme. In the 1830’s, bricks were added underneath the arches to prevent leakage. The canal was originally lined with clay, but in 1870 a concrete liner was formed into the top of the aqueduct, and metal spikes that protruded from the concrete were used to hold timber planking that prevented the canal boats from scraping on the concrete.

In 1983, the Schuylkill River Greenway Association began efforts to restore the aqueduct and subsequently had the structure listed on the National Register of Historic Places. The restoration efforts were celebrated in February, 1990, and now the Berks County Parks and Recreation Department administers this historic landmark from Berks County’s past.

Located adjacent to the aqueduct, the Beidler House was built in 1783 by Conrad Beidler to serve as a home for the operator of the nearby mill.

The Beidler Mill, built around 1766, was destroyed by fire in the early 1950’s, and only the stone walls of the building remain. When it was in operation, the mill was used to process grain. Powered by a water wheel, the mill relied on a 100-foot long holding pond that drew water from the Allegheny Creek; this pond is still visible today. The house and mill serve as a reminder of the area’s agricultural industry and reflect the economic and social prominence of the miller in the local community.