Cliveden of the National Trust 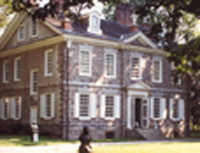 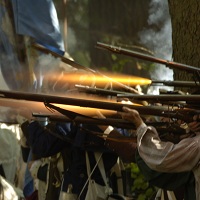 Cliveden is often called “the Chew House” because seven generations of one family lived within its elegant colonial walls for more than 200 years.

Cliveden’s brush with American history occurred ten years after its completion. At sunrise on October 4, 1777, American troops under General George Washington marched on British troops stationed in Germantown. A regiment of about 125 British soldiers had barricaded themselves behind Cliveden’s stone walls and distracted Washington.

Cliveden and the Redcoats proved indestructible. Battle scars still mar walls inside and out. Though Cliveden stopped Washington, both sides honored the valiant fight that occurred here. The British struck a medal, awarded for heroism by the men who held the house, while Americans who had fought here came back and recollected what happened that dark day. The Chews, too, though initially faced with the reality of a damaged house, gradually come to see Cliveden as a remarkable symbol of the struggle required to create the nation.

In 1972, the Chew family transferred ownership of Cliveden, its remaining six acres of parkland, and its collection of artifacts to the National Trust for Historic Preservation. The Chew family tradition of preserving, researching and interpreting this legendary house to the public continues today.