Directions:
The Philadelphia Museum of Art is located at 26th St. and the Benjamin Franklin Parkway. 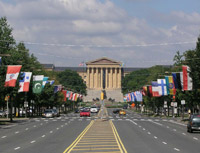 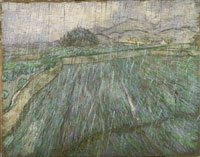 Rising majestically at the end of the Benjamin Franklin Parkway, the Philadelphia Museum of Art stands as one of the great art institutions of the world. In the 125+ years since its founding, it has grown far beyond the limits originally set for it. Today, the Museum houses over 225,000 works of art encompassing some of the greatest achievements of human creativity, and offers a wealth of exhibitions and educational programs.

Historically, the Museum was a legacy of the great Centennial Exposition of 1876 held in Fairmount Park. In March 1873, an act of the Pennsylvania State Legislature set in motion plans for the construction of Memorial Hall—a permanent building to be designed by Hermann J. Schwarzmann—which was to serve as the art gallery of the exposition. At the conclusion of the Centennial celebrations, Memorial Hall was to remain open as a Museum of Art and Industry “for the improvement and enjoyment of the people of the Commonwealth.”

Today, the City of Philadelphia owns the Museum building, the Rodin Museum building, the Ruth and Raymond G. Perelman building (2501 Benjamin Franklin Parkway) and the two historic houses in Fairmount Park that are operated by the Museum (Mount Pleasant and Cedar Grove). The future of the Museums will work towards attracting increasingly diverse audiences, creating additional gallery spaces and research facilities, and enhancing visitor services and amenities for a growing public.