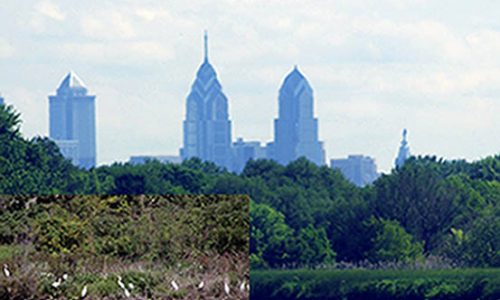 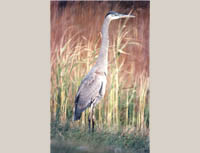 The John Heinz National Wildlife Refuge at Tinicum is located near the confluence of the Schuylkill and Delaware Rivers about 1 mile from the Philadelphia International Airport. Over the years, the freshwater marshes have become a resting and feeding area for more than 280 species of birds, 80 of which nest here. Fox, deer, muskrat, turtles, fish, frogs and a wide variety of wildflowers and plants call the refuge “home”.

The mouth of the Schuylkill River was once covered in and concealed by tidal marshes like those seen at the Wildlife Refuge. Dutch explorers gave the river the name Skool-kyll, which translates to “hidden river.” Swedes, Dutch and English diked and drained parts of the marsh for grazing in the 17th and 18th centuries. At that time, the tidal marshes measured over 5,700 acres. Rapid urbanization since World War I has reduced tidal marshes to approximately 200 acres. The remnant of this once vast tidal marsh is protected by the refuge.

A diked, non-tidal area of 145 acres, adjacent to the eastern end of Tinicum marsh, was donated by the Gulf Oil Corporation to the City of Philadelphia in 1955. This area, administered for the benefit of wildlife and people, was known as Tinicum Wildlife Preserve. The areas of open water along with the adjacent heavily vegetated tidal wetlands, formed an ideal habitat for thousands of migratory waterfowl.

In 1969, the remaining area was threatened by plans to route Interstate 95 through it and by a sanitary landfill on the tidal wetlands. These activities started a long series of injunctions, public hearings and extraordinary efforts by private and public groups to secure rerouting of the highway and termination of the landfill operation. Under legislation passed by Congress in 1972, authorization was given to the Secretary of the Interior to acquire 1200 acres to establish the Tinicum National Environmental Center.

In November 1991, in a bill sponsored by Congressman Curt Weldon (R-PA), the name of the refuge was changed to John Heinz National Wildlife Refuge at Tinicum to honor the late Senator who helped preserve Tinicum Marsh.