The Cemetery office is in the Hamilton mansion and is open Monday to Friday 10 am - 3 pm and by appointment. Grounds open daily dawn to dusk. 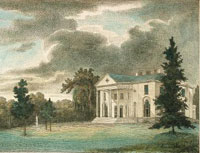 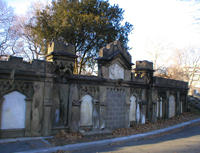 The Woodlands features one of the most architecturally significant mansions in America, its Carriage House, and an active Rural Cemetery which was incorporated in 1840. The pathways and avenues of the cemetery and mansion comprise the Woodlands Heritage National Recreation Trail. The entire property is a National Historic Landmark.

The story began in 1734, when noted lawyer Andrew Hamilton purchased a 250-acre tract of land on the outskirts of Philadelphia. The land holdings were inherited in 1747 by Hamilton’s grandson, William, an avid botanist who also had a passion for architecture and landscape design. Here, William Hamilton created one of the finest landscape gardens of its day and introduced many exotic plants. His mansion and stable, built 1787-92, are early examples of the neoclassical Adamesque-Federal style. In 1840 the estate became one of the first large rural cemeteries in America.

In 1805 Lewis and Clark shipped trunks of specimens from what is now North Dakota back to President Thomas Jefferson. An avid gardener, Jefferson had a special interest in the botanical specimens contained in the trunks. He sent dried specimens of plants to Benjamin Smith Barton and the packets of seeds and cuttings of the Osage orange, gooseberries, and Ariskara tobacco to Philadelphia’s William Hamilton.

Today visitors may enjoy an educational tour of this beautiful building and grounds, including internationally renowned gardens and plant collections, and the Cemetery. The bodies of many noteworthy Americans are interred at the Woodlands. To mention a few: Joseph Campbell, founder of the Campbell Soup Company; noted artist, Thomas Eakins; Ebenezer Maxwell, whose mansion stands as a museum in Germantown; and Civil War general, John Joseph Abercrombie.