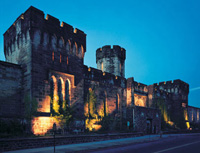 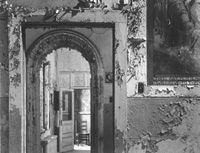 Opened in 1829 as part of a controversial movement to change the behavior of inmates through “confinement in solitude with labor,” Eastern State Penitentiary quickly became one of the most expensive and most copied buildings in the young United States. It is estimated that more than 300 prisons worldwide are based on the Penitentiary’s wagon-wheel, or “radial” floor plan.

Some of America’s most notorious criminals were held in the Penitentiary’s vaulted, sky-lit cells,including bank robber Willie Sutton and Al Capone. After 142 years of consecutive use, Eastern State Penitentiary was completely abandoned in 1971. With generous funding from The Pew Charitable Trusts, stabilization and preservation efforts begin in 1991, and 3 years later the site was opened for historic tours. The site now stands as a lost world of crumbling cell blocks and empty guard towers.

In 1995 Eastern State’s arched cell blocks and central rotunda are transformed into a mental institution in the movie 12 Monkeys, with Brad Pitt.