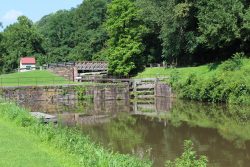 Montgomery County was originally part of Philadelphia but those that lived in the upper region wanted a new county to shorten the distance to the county seat. Montgomery County was created on September 10, 1784 and was named after General Richard Montgomery. The area has a strong Quaker heritage and played a big role in the abolitionist movement and was an active piece of the Underground Railroad. Today, northern Montgomery County has farms and open lands while suburban neighborhoods are spread across the southern and central parts of the county.

Sites on the Trail in Montgomery County

The carousel was built in 1905 and it’s the second oldest operating Philadelphia Toboggan Company wooden carousel in the United States. It took almost 20 years of labor and...

This popular family destination features North and South American wild animals in naturalistic settings with a focus on educating young children. Elmwood Park Zoo was founded in 1924, when...

Today, 175 acres of Mill Grove’s original estate remains largely as Audubon found it – a haven for birds and wildlife. The property boasts more than seven miles of...

Manatawny Green Miniature Golf is a recreational facility in the Borough of Pottstown. The course occupies what was formerly a long-vacant industrial lot. It was transformed into a green...

This first public, non-sectarian cemetery in Montgomery County was founded in 1847. It contains the remains of some of the most notable families of the area and boasts over...

Montgomery County Community College West Campus is located in Pottstown along College Drive, across from the Schuylkill River Heritage Area headquarters. The college is partnering with the Heritage Area...

The Norristown Farm Park is a 690 acre Park owned by the Commonwealth of Pennsylvania and is operated and maintained by Montgomery County. The area that encompasses Norristown Farm...

The 19-mile Perkiomen Trail runs through the Perkiomen Creek Valley from its junction with the Schuylkill River Trail at Oaks, Upper Providence Township to the largest County Park, Green...

The manor house exemplifies the restrained elegance of early Georgian architecture popular with wealthy English gentry during the mid-18th century. Built in 1752, the mansion was situated on a...

The Pottstown RiverWalk is a trail located in Riverfront Park that connects to the park’s existing Schuylkill River Trail, creating a one-mile loop trail through a wooded area and...

Learn about the role the Schuylkill River region played in three revolutions: the American, Industrial and Environmental. The center features fun, interactive exhibits, as well as maps, video monitors,...