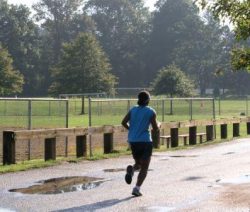 Runners and joggers will find a variety trails, tracks, and events to allow them to stretch their legs throughout the Heritage Area. The area is criss-crossed by a network of paved and gravel trails including the Schuylkill River Trail. The Heritage Area also plays host to a number of 5Ks and 10Ks, marathons, and benefit walks throughout the year. Many of the region’s towns provide a backdrop for daily exercise or a quiet stroll.

While runners and joggers can enjoy their sport almost anywhere, several sites provide wonderful facilities for runners. The Schuylkill River Trail is paved between Fairmount Park and Valley Forge NHP and is extremely popular with local runners and joggers. Within both of these parks, runners will find a vast network of trails and paths on both flat and hilly terrain. Other popular trails for runners include the Perkiomen Trail, the Union Canal Towpath, and the Schuylkill Valley Heritage Trail (in Tamaqua, Schuylkill County).

For those with a competitive edge, annual events like the Philadelphia Distance Run, the Broad Street Run, and the Valley Forge Revolutionary 5-Mile Run might be just what you’re looking for.

Many of the communities throughout the Heritage Area are best explored on foot. Walking or jogging along the streets of any of the region’s towns and villages will give you a glimpse at what makes this region unique.

Because many of the region’s backroads can be narrow and windy, runners and joggers are advised to pick alternate routes with sidewalks or wide shoulders for their own safety.

The Schuylkill River Trail parallels Kelly Drive along the east side of the Schuylkill in Philadelphia and is one of the region’s most popular running and jogging trails. Each morning and evening the trail is lined with residents and visitors alike. Particularly popular is the 8-mile “Loop” that crosses the Falls Bridge in East Falls. You can begin your trip at a number of places along Kelly Drive or Martin Luther King Drive, but most folks prefer to start at Lloyd Hall or East Falls. Martin Luther King Drive is closed to vehicular traffic on Saturdays and Sundays 6 AM to 5 PM from April to October. The lower portion from Eakins Oval to Sweetbriar Drive re-opens at 12 noon.

Distance runners may wish to skip the loop and run the trail from Center City all the way to Valley Forge. The 26-mile section is paved from Center City to Manayunk, where it joins the gravel Manayunk Towpath. Paving resumes again in Montgomery County all the way through Valley Forge NHP. Runners can catch a ride back to the city on SEPTA’s regional rail line in Norristown.

Another 20-mile section of the Schuylkill River Trail runs from Pottstown’s Riverfront Park to Reading Area Community College, in Reading. From Pottstown to the Montgomery/Berks County line, a distance of about 2.5 miles, the trail is paved and runs for part of the way beside the riverfront. In Berks County the trail is crushed stone and stretches through mostly wooded areas, providing a nice shadey spot to jog in the summer time. For maps, visit the Schuylkill River Trail website.

Running & Jogging Sites on the Trail

The Schuylkill Highlands is one of seven ‘Conservation Landscape Initiative’ regions in Pennsylvania,and as the name suggests, includes the Schuylkill River Watershed for the most part and the southeastern...

The John Heinz National Wildlife Refuge at Tinicum is located near the confluence of the Schuylkill and Delaware Rivers about 1 mile from the Philadelphia International Airport. Over the...

Destination Schuylkill River celebrates life along the River and seeks to connect our communities to the river through planning, programming and projects. What is there to do? How can...

The Schuylkill River in Upper Providence Township forms a natural backdrop to this 15-acre display of wild animals and raptors indigenous to Pennsylvania. Picnicking and fishing are popular along...

Central Perkiomen Valley Park is an 800 acre park that extends over 10 municipalities, offering a wide variety of family activities. Visitors can enjoy a children’s playground as well...

French Creek State Park is one of 6 State Parks in the Schuylkill River Heritage Area, and one of the best places for outdoor recreation, rest, and relaxation in...

Known for its popular camping area, Locust Lake State Park nestles on the side of Locust Mountain. The 52-acre Locust Lake is located between two campgrounds and is surrounded...

Monocacy Hill Recreation Area is a 428 acre forest located in Amity Township , Douglassville, PA. This recreation area was purchased by Amity Township in 1967 for open space...

Daniel Boone is an American legend, and he developed his love of nature, and inquisitive nature on his family’s farm in the Oley Valley. After Daniel’s father, Squire Boone,...

One of the most heavily industrialized creeks in America, the Wissahickon Creek and its impressive valley were home to dozens of mills and factories throughout the 18th and 19th...

While cycling, Manayunk can be a destination or an excellent resting point on the Philadelphia-to-Valley Forge section of the Schuylkill River Trail. A portion of the trail incorporates the...

The 19-mile Perkiomen Trail runs through the Perkiomen Creek Valley from its junction with the Schuylkill River Trail at Oaks, Upper Providence Township to the largest County Park, Green...

The Heritage Center is located along the Tulpehocken Creek west of Reading and is home to the Gruber Wagon Works, a National Historic Landmark, the C. Howard Hiester Canal...

The Black Rock Sanctuary is located along a bend in the Schuylkill and was used by the Commonwealth of Pennsylvania as a basin for settling coal silt out of...

The Norristown Farm Park is a 690 acre Park owned by the Commonwealth of Pennsylvania and is operated and maintained by Montgomery County. The area that encompasses Norristown Farm...

The Schuylkill Center is the largest tract of privately owned land in the City of Philadelphia. Located on the border of Philadelphia and Montgomery County, SCEE is a wonderful...

Established in 1836, Laurel Hill is one of Philadelphia’s premier historic landmarks and one of the only cemeteries in the United States to be honored as a National Historic...